Over the past eight months, the university celebrated anniversaries, mourned losses and engaged in thoughtful conversations about how to build a stronger community. In the annual Year in Review issue, The Hoya looks back on the headlines that captured students’ attention and the themes that dominated the year.

The Year in Brief

From the revival of the beloved tradition of stealing the clock hands of the Healy Tower, to the end of an era marked by Rhino’s closing, the 2014-15 academic year made an impact on Georgetown. The Hoya reflects on the events that influenced the university community, month by month.

From Ferguson to Georgetown, Igniting Conversations on Race and Diversity

Over the past eight months, conversations about race and diversity became ingrained into the national consciousness. Striking images of armed police fighting back protesters in Ferguson, of Eric Garner falling to the ground in Staten Island as a police officer held him in a stranglehold and of protesters raising their fists in front of the White House captivated the nation. These same conversations also played a major role in student life on campus, as the university community reflected on the state of race relations and diversity both nationally and at Georgetown.

The university released an updated speech and expression policy in May 2014 that attempted to clarify the policy in four ways: designating Regents Lawn, the lobby of the Leavey Center and the Healey Family Student Center as “public squares” for student free speech, expanding beyond Red Square; increasing the efficiency of the classroom reservation process; permitting protest anywhere on campus provided no other campus policies are violated; and expanding the role of the Speech and Expression Committee by allowing it to review student complaints and ensure fair and accurate application of the policy. This academic year, the policy has been tested in a variety of ways.

On a campus with a population that is known for its passion for and devotion to activities, academics and internships, students often put health on a backburner. The university faced continued struggles this year addressing the problems that students encounter in maintaining their physical, mental and sexual well-being. These issues contributed to ongoing discussions on campus about the shortcomings of health resources available, the policies in place to support student health and possible improvements to both.

Drilling and hammering sounds became background noise to students this past academic year. Multiple construction projects — many still in progress — yielded the opening of new buildings and the closing of familiar spots on campus, much to the dismay of students who claimed that the planning of these projects neglected their voices.

The campaign for D.C. statehood saw immense progress in the past months — including the first U.S. Senate committee hearing on the issue in over 20 years — but the possibility of the District of Columbia becoming the 51st state is still just a conversation. Del. Eleanor Holmes Norton (D-D.C.), the District’s non-voting member of the House of Representatives, is leading the campaign for D.C. statehood.

This past academic year, Georgetown students struggled with national issues such as race relations, as well as personal issues of mental health and safety. While much of this dialogue took place in classrooms, Gaston Hall and Red Square, students also explored these themes through art. The student-produced film “11:59,” the Nomadic Theatre and Mask & Bauble Dramatic Society’s co-production of “Killer Joe” and Black Movements Dance Theatre’s spring show, “Truth Be Told,” all engaged in thoughtful and deep reflection, captivating audiences and provoking incisive conversations. 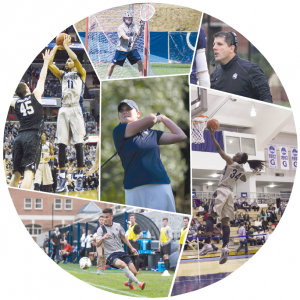 Every fall, the newest batch of Hoya student-athletes arrives on the Hilltop, touted as some of the best recruits in the country. As each sport gets underway, coaches and fans are eager to see which Hoyas will stand out from the pack and make immediate contributions to their teams. Several athletes in this year’s freshman class managed those lofty expectations and stood out, even on teams crowded with upperclassmen. These first-year Hoyas, including one first-year coach, quickly found ways to contribute on their respective squads and show promise for the years to come.

The Year in Sports

As another academic year filled with spectacular plays and clutch performances comes to an end, The Hoya looks back at some of the most exhilarating and heart-warming moments in varsity sports.

The university community mourned the deaths of SFS Dean Emerita Carol Lancaster, Andrea Jaime (NHS ’17) and other alumni and faculty.

After an eventful year for campus life, student activism proved to be a deciding force in how diversity, freedom of expression and student-administration communication shaped the Georgetown community. Here is the editorial board’s final word on major events of the 2014-2015 academic year.