Abusive Priests in University’s Past, Present

14 priests with connections to Georgetown University have been credibly or plausibly accused of sexual abuse. One known abuser was recognized as a professor emeritus of the university until Wednesday afternoon.

Letter From the Editor

In bringing to light the abuse they have suffered, these survivors have called on all of us to take better care of each other.                 Will Simon, Issue Editor

The 14 priests named in this report lived and worked in all corners of our university — not lurking, but playing prominent roles in the academic, spiritual and moral development of thousands of Georgetown students. They were chaplains-in-residence and professors, friends and mentors, advisers and administrators: Their centrality to the Georgetown community cannot be overstated or forgotten.

Stronger than the influence of these 14 priests, though, is a nationwide community dedicated to the support and protection of survivors — and to preventing clerical abuse in the future. In writing and editing this report, we spoke to activists, journalists, lawyers, clergy and other experts, every one of whom was generous with their time and wisdom, not to mention courageous in their lifelong work.

By Adam Shaham, Will Simon and Will Cassou

Since the founding of Georgetown University, its students have learned from, lived with and sought the guidance of religious leaders on campus. Of those leaders, 14 have been credibly or plausibly accused of sexual abuse, according to an investigation by The Hoya.

The credibility of accusations against each priest is based on settled lawsuits, the review of Catholic Church authorities or admissions of guilt. Each priest’s affiliation with Georgetown was verified through media reporting, public church statements or university archival material. Though the known abuse periods of three named priests overlaps with their time at Georgetown, neither this report nor the university’s internal review discovered allegations of abuse on campus.

Georgetown confirmed all 14 priests were at some point affiliated with the university in a March 13 statement to The Hoya. Yet the university has publicly recognized abuse allegations against only four. One retained the title of professor emeritus at Georgetown until this week.

In the midst of an abuse crisis within the Catholic Church, the five Jesuit provinces in the United States released lists in December and January of priests accused of child sexual abuse. Yet the incomplete nature of these lists has sparked even greater criticism from lawyers and advocates, including lawyer Mitchell Garabedian, who has represented over 2,000 survivors of clerical abuse.

“The diocese and Jesuit Provinces want to appear as doing the right thing when they’re in fact doing the bare minimum,” Garabedian said in a phone interview with The Hoya.

Two ordained Jesuits with previous Georgetown affiliations and credible abuse allegations — Fr. Thomas M. Gannon, S.J., and Bernard Knoth — served in the Maryland Province of the Society of Jesus but did not appear in the province’s Dec. 17 report, even after another province’s report revealed their time at Georgetown four days later.

And while the Maryland Province report named priests credibly accused of abusing minors, it mentioned no priests accused of abusing young adults, such as former Georgetown professor Fr. Daniel C. O’Connell, S.J., who settled two cases in 2003 and 2016 with survivors of his abuse.

By The Editorial Board

University President John J. DeGioia named four abusive priests in Georgetown’s history in a universitywide email Dec. 17. Since then, The Hoya has identified 10 more, including two associate deans from the last 25 years and Fr. Daniel O’Connell, S.J., who remained a professor emeritus until Wednesday afternoon.

The abuse allegations against all 14 priests are a matter of public record, and most of their work at Georgetown can be found in the university’s own archives. Still, Georgetown has been willfully ignorant in recognizing the extent of its connection to clerical abuse.

Georgetown can no longer hide from its disturbing past in the clergy sex abuse crisis. The university must publicly acknowledge and condemn the other 10 abusive priests to allow the campus to move forward and take accountability for its negligence. 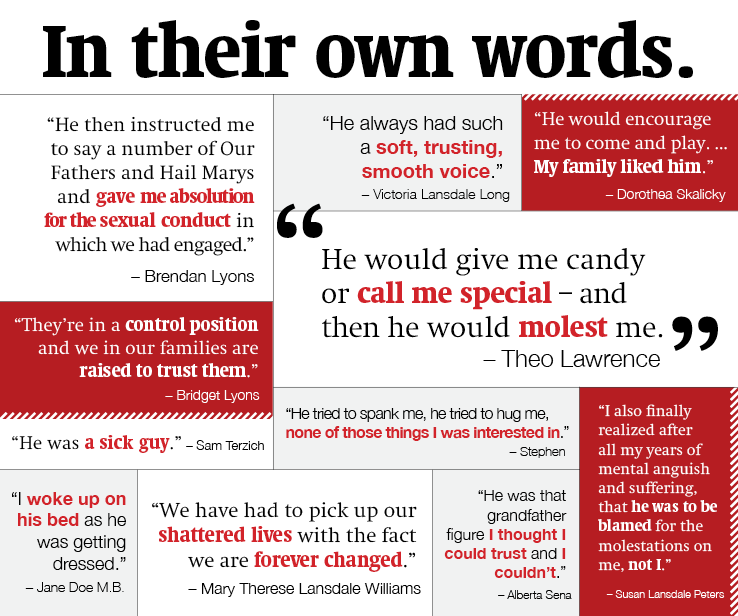 By Grace Laria and Julie Bevilacqua

Our senior year began after the Pennsylvania grand jury report named 300 Catholic priests across the state who had sexually abused children over a span of 70 years. The sexual abuse crisis in the church has since permeated our ministry work on campus, which has spanned from organizing community reflections to pushing the university to revoke the honorary degrees of high-ranking clergy members accused of abuse and once lauded as members of the Georgetown family.

As active members in Georgetown’s Catholic community, we have both long been aware of a systemic lack of transparency and pattern of abuse within the Catholic hierarchy that have allowed the sexual abuse crisis to continue to this day.

News of Georgetown’s failure to publicly acknowledge at least seven Jesuit priests credibly accused of abuse who have had direct affiliations with this university, however, was a slap in the face.

After The Boston Globe’s investigation of clerical sex abuse was released in 2002, many of us Catholics were shocked to learn that some of the priests we considered part of our family were abusers. As Hoyas, it is even more shocking and disheartening that some of these abusers were once beloved members of our Georgetown family.

As those of us who have close relationships with priests know, they are more than just spiritual leaders: They can be teachers, confidants and friends. Because of their spiritual role, we often hold their advice at the same or even at a higher regard than that of our biological family. Unfortunately, the abusive priests knew the amount of trust we placed in them. They saw a power dynamic and, rather than using it to further God’s will, used it to commit their sickening sins.

While nothing can excuse the terrible acts of the 14 priests who were once trusted by the Georgetown community, we should still welcome the Jesuits on our campus as mentors and members of our family and focus our efforts toward advocating for change within the Catholic Church to ensure that sexual abuse by priests never happens again.

If you or anyone you know would like to receive a sexual assault forensic examination or other medical care, including emergency contraception, call the Network for Victim Recovery of D.C. (202-742-1727).

To report sexual misconduct to the university, you can contact Georgetown’s interim Title IX coordinator (202-687-9183) or file an online report here. For more information, visit sexualassault.georgetown.edu. If you have information to share with The Hoya regarding this investigation, contact us at [email protected] or 421 Leavey Center, Georgetown University, Washington, D.C. 20057.

BishopAccountability.org, a survivors’ advocacy organization that compiles and categorizes records and articles connected to abusers, served as an effective database from which to find more information about each priest. While a great deal of the information presented in this report is in credit to its meticulous work, every detail found on the website was verified by another source.

The report also draws from the accounts of national, regional, local and campus media outlets across the United States. News media were critical not only in providing detail about abusers’ prior work and the allegations against them, but also in creating a database of sources in the activist community.

The catalogues and records of the Catholic Church and Jesuit order were invaluable in identifying the locations of priests during each year of their ministry, including delineating between priests associated with Georgetown University and with the Woodstock Theological Center. The university’s collections of the Official Catholic Directory and catalogues of the Maryland Province of the Society of Jesus were especially instructive.

By studying telephone directories, yearbooks, alumni magazines, schedules of classes and other archival material, university archives staff in the Booth Family Center for Special Collections and the staff of Woodstock Library have worked tirelessly to ensure this report is accurate in its understanding of each abuser’s connection to Georgetown. Their persistent dedication to establishing the historical record was unmatched in both commitment and depth.

Further questions regarding the methodology of the report should be directed to [email protected]. 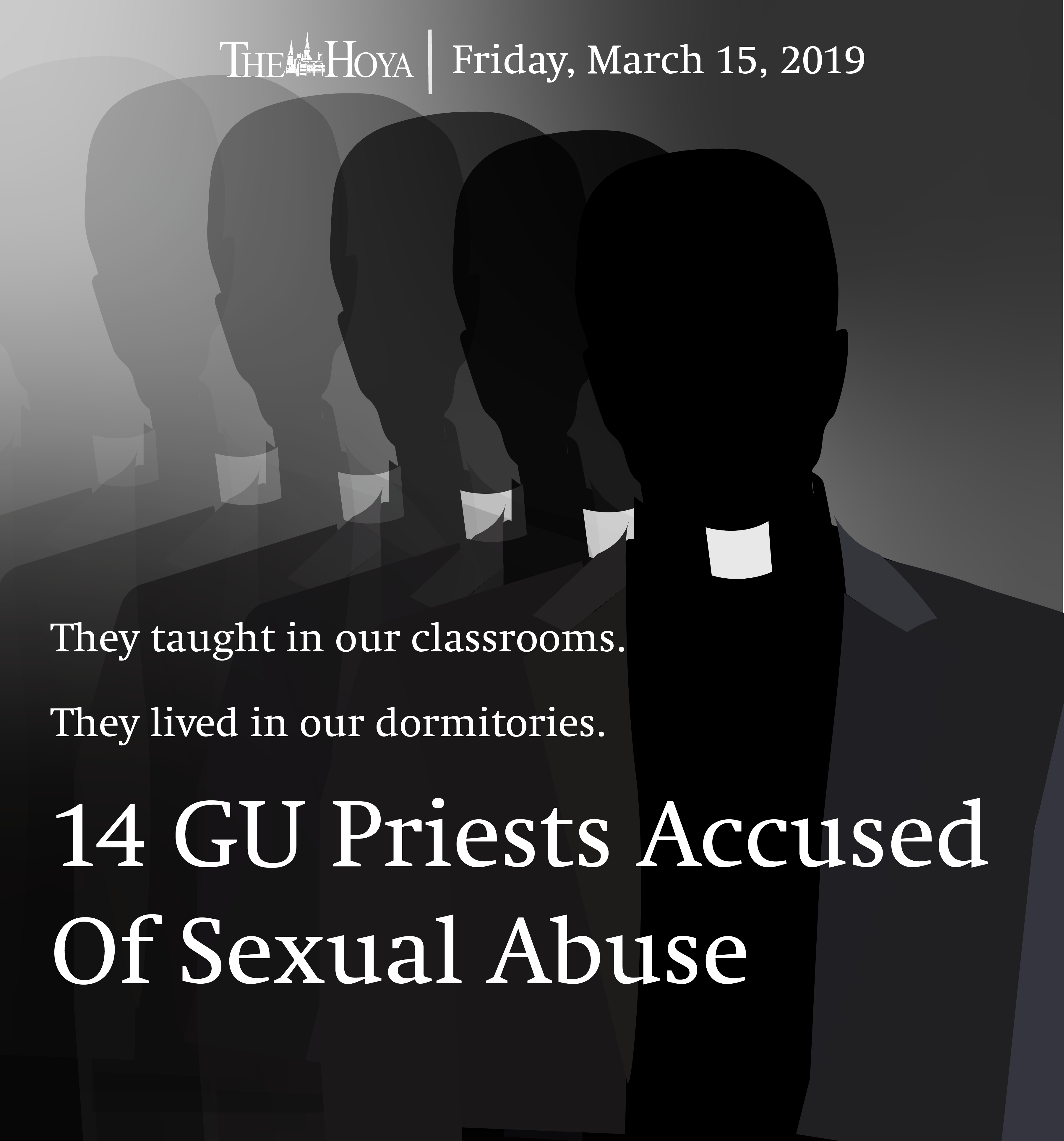 Developments Since The Georgetown 14

By Sana Rahman and Mason Mandell

John had known Fr. Alvaro Ribeiro, S.J., his former English professor and chaplain-in-residence in Copley Hall, for a full semester when the alleged incidents began in December 1997. What started as an uncomfortable request for a hug turned into a series of increasingly uncomfortable episodes, including offers of alcohol and pornography and Ribeiro shaking his penis in front of John, who is referred to by a pseudonym for privacy.

After John reported the inappropriate behavior to Rev. William Byron, S.J., the rector, or head, of the Georgetown Jesuit Community in spring 1998, Ribeiro left campus for three semesters under a sabbatical leave of absence, despite being at least one semester short of qualifying, according to Georgetown University archives. Ribeiro returned to Georgetown in spring 2000, teaching English classes for freshmen and seniors until 2007. Ribeiro died in 2013.

Ribeiro resigned from Georgetown in March 2010 after an investigation into unwanted touching of students and other inappropriate behavior, according to a university spokesperson. The investigation, overseen by Georgetown’s Office of Institutional Diversity, Equity & Affirmative Action in consultation with the Maryland Province of the Society of Jesus, has not been made public until Wednesday.

Five months ago, The Hoya published an investigation identifying 14 former Georgetown University religious leaders credibly accused of sexual abuse — including two associate deans, three chaplains in residence and seven professors. The university’s only response was to add two brief paragraphs on its website reaffirming that none of the abuse had occurred on campus.

In December 2018, shortly after the Maryland Province of the Society of Jesus released a list of abusive priests in its history, University President John J. DeGioia (CAS ’79, GRD ’95) sent a campuswide email naming four men from the list who had worked at Georgetown. The Hoya’s investigation identified 10 additional clergy members with credible accusations of abuse, none of whom the university has condemned, despite demands to do so.

To demonstrate that Georgetown is capable of acting morally — and not simply taking calculative actions to protect its reputation — Georgetown must publicly condemn the 14 abusive religious leaders and organize university-wide dialogue on its historical connection to clerical abuse.

In 2009, Georgetown University and Fordham University were both notified of a sexual predator who had taught at both institutions. While Fordham immediately banned the predator, Fr. Daniel O’Connell, S.J., from campus, Georgetown failed to take substantial action until just weeks ago.

Georgetown’s delayed response to credible allegations of sexual assault against O’Connell follows a trend of unreasonably long delays in responding to university-connected clerical abuse: at every opportunity, the university has fallen short in condemning perpetrators.

By Riley Rogerson and Myroslav Dobroshynskyi

The Woodstock Theological Center moved into Old Ryan, now known as Ida Ryan Hall, in 1978. Over the next several decades, three priests credibly accused of sexual misconduct would work at Woodstock, a Jesuit-run research institution housed on Georgetown’s campus. All three lived in the Woodstock Theological Residence, two blocks away from the university’s front gates.

Nineteen years after the center’s opening, Woodstock hired Fr. William J. Walsh, S.J., who was later found to have committed sexual abuse in at least four locations, according to a December 2018 report issued by the Maryland Province of the Society of Jesus. Walsh sexually abused five of his nieces hundreds of times while they were between 5 and 14 years old.